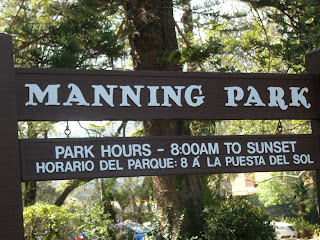 I recently realized that Manning Park has two play areas: Upper Manning and Lower Manning. I reviewed the upper playground which is great for toddlers, but not so interesting for big kids. Lower Manning is across the street and down the road from the lower park across from Montecito Union School (Google Maps). It has a climbing structure (with a wall, platform, ladder and rope),  swings, and 3 spinning toys (poles and wheel) over wood chips. It also has a volleyball area and baseball field.

Pros
It is very picturesque (there were nasturtiums blooming when we were there).
There are bathrooms at the far end of the field.
It is set back from the road, but close to the parking lot.
The climbing equiptment is unique and fun.

Cons
There aren't many play items, so kids might get bored.
There is a creek nearby.
There aren't items for little kids.


Posted by Rhonda DuPar at 2:28 PM No comments: 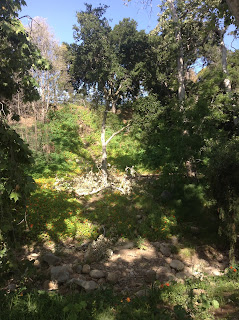 Last week I was asked to share a life hack with my MOPS group and while I do not know how to fold a fitted sheet or how to regrow my kitchen scraps, I do know a lot about parks. So here are my top three park lists in a handy one page format! One of the questions was "what is your favorite park?" People. That is like asking a bookworm their favorite book. I still love University Circle Park because it has play things for big and little kids. Willowglen is a great park for the paths for bikes and scooters. For toddlers, I love Hidden Valley Park and Hilda Ray McIntrye because they can't escape. When I have both my kids, we often go to Tucker's Grove or La Mesa Park. I can't pick just one! 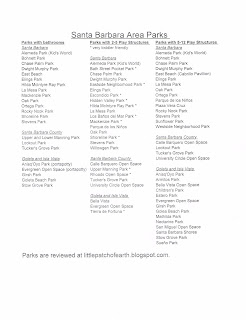 Posted by Rhonda DuPar at 1:38 PM No comments:

Get any group of women together (especially moms of young kids) and eventually the question is asked ”Are you done?” It doesn't matter if you have one child or four, we are all curious as to what other people’s plans are. When I tell people we are done at two, there are several responses. Other moms of two nod and concur that two is a good number. And two is a good number, but that is not why we have 2 kids. If they press me, I say, “I was really sick after Grace was born.” Most people stop there because that can mean so many things.
After my first daughter was born, I had high blood pressure that needed medication for a few weeks. It didn’t seem like a big deal. The second time around I had another healthy pregnancy-until the 37th week. Then the problems started. My blood pressure went up and there was protein in my urine. I had already started maternity leave, so I could rest 3 times a day as my doctor advised. Sort of. With a lively toddler present.

At 38 weeks, he was concerned enough to induce me. And the problem was solved. Only it wasn't. After my first pregnancy, I knew to pay attention to my blood pressure.


I didn't feel well. More than the normal I-have-an-infant-who-doesn't-sleep-and-am-exhausted. I trudged along and kept breast feeding and cuddling because that is what we mothers do. But I knew I wasn't OK and my blood pressure wasn't going down. So I called the doctor on call and couldn't reach her. I got an answering machine in her office when she was supposed to be on call.


The next day I reached my doctor and he prescribed a blood pressure medication. It took far too long for the nurse to call it in (the next day) so I could start taking it. Meanwhile I was getting sicker. About 6 hours after the first dose of medicine, I woke up from a much needed nap with the worst headache I have ever had. Again I called the doctor on call and she advised me to go to the hospital. Kind of. With a lot of pauses and reminders that I would be taking a 5 day old to the ER and they would send me home anyway.


My sweet sister in law, a nurse, came over after her long shift. She took my blood pressure and, with concern, told me to go to the emergency room. She left with my five day old home, we dropped the three year old off with her grandparents and we set off to the hospital. No overnight bag. An overly calm ER doctor saw me fairly quickly and stated he thought I was over stressed. “We'll just bring the lights down and let you relax and that blood pressure will come right down.” Right.


They sent me off to get a urine sample (as if you could get a clean sample from a woman five days post-partum!?). And that’s when the real trouble started. In the ER bathroom I had a seizure. I hit my head on the tile as I started to seize and fell down. My husband, who had parked himself outside the door, heard the noise, opened the door and called out for help. I can't imagine how scary it would be to find your spouse on the floor, having a seizure with no idea that this could happen.


Looking back on this moment, there are so many things for which I am grateful. I didn't do permanent damage to my brain when hitting my head. I didn't have a seizure at home in front of my kids. I was seconds away from the medical care I needed, medical care not available to many mothers around the world. One of the ER nurses is a friend, who could speak knowledgeably to my panicked husband. I have medical insurance and didn't have to pay the $26,000 for this care. My girls had loving family close by to care for them overnight and over the following days.


The next 24 hours are hazy. In fact, for weeks afterward, I would chat with my husband, he would make an offhand comment and I would respond, “when did THAT happen?!” It is truly disconcerting to have gaps in your memory.


My first hazy memory is of my sweet friend above me telling me that I was OK. I had had a seizure, but I would be OK. They started me on potassium chloride and an IV blood pressure medication. They sent me off for a CT scan to make sure the seizure wasn't caused by a neurological problem and that I hadn't hurt my brain by hitting my head on the floor. I spent a night apart from my girls in the ICU closely monitored by nurses. My liver and kidneys had begun to shut down, but as the treatments began to work, I began to get better. My urine output was over four liters overnight as my organs began to work again.


After a night in the ICU, they moved me to the labor and delivery area in the hospital to an antepartum room. Despite the policy of not having the children of patients stay at the hospital, the staff made an exception and my husband picked up our days old daughter to stay with me. The nurses did not let me get out of bed for two days.


Thankfully the rest of the hospital stay was boring. I wanted to go home, but the staff needed to monitor me further. My town had one of the leading specialists in preeclampsia/eclampsia. He treated me for four days in the hospital until he and my obstetrician were confident I would not have any more seizures and my blood pressure had been lowered through the medication.


The long term result is that I have a high risk for preeclampsia/eclampsia in any future pregnancy as well as a greater risk of high blood pressure and stroke for the rest of my life. While I had some symptoms of eclampsia and some of postpartum preeclampsia, other symptoms were strangely absent. Both of these conditions are not well understood since symptoms of preeclampsia resolve after childbirth for most women.


We know surprisingly little about this condition. Doctors can describe symptoms that often happen, the high blood pressure, the protein in the urine, the swelling of hands and feet and organs that begin to shut down. But even experts in the field are still guessing at the root cause.

So we are a family of 4 because I am done bearing children. And two is a good number. In this my 40th year, I am walking in the Promise Walk which raises awareness, provides education and funds research for preeclampsia. I will walk for the thousands of other women who have had preeclampsia and eclampsia. And the many women in future who will benefit from a better understanding of the condition. If you feel led, you can donate here.
Posted by Rhonda DuPar at 10:20 PM No comments:

I am turning 40 this year, y'all. It is just a number. But I am going to meet it with a bang. Here is my 40 year bucket list. Some small things, some big. I hope to accomplish them all this year, not before my birthday in September.

A friend inspired me to begin sharing some of my favorite recipes on Facebook, but I wanted to post here too. We have themes that I can share around. We eat Asian about once a week. There are five  we like best. I have been using tamari in place of the soy sauce for you GF friends.
1. Orange Chicken
2. Baked Teriyaki Bowls
3. Sweet and Sour Chicken, which I got from Relish, Relish, a subscription site. The sauce is what makes it good.
4. Pad Thai
Posted by Rhonda DuPar at 8:03 PM No comments:

A friend inspired me to begin sharing some of my favorite recipes on Facebook, but I wanted to post here too. We have themes that I can share around. We eat quinoa salad about once a week, mostly on nights when we have been gone for a playdate in the afternoon. There are four we like best.

My favorite meal planning worksheet is from iheartnaptime.net.

Posted by Rhonda DuPar at 7:50 PM No comments: 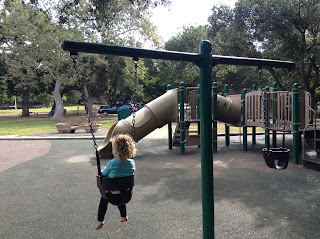 A friend requested a list of parks with baby/toddler swings. Here goes:

Rhonda DuPar
Hi, my name is Rhonda. I am currently mother to two little girls and a homemaker. I blog about our adventures in our home area of Santa Barbara, Ca.